We offer a range of products for all of your safe patient handling needs. Please click on an image below for more information.

Ceiling lifts have become recognized as the best solution to lifting in a healthcare environment. The passage below is an excerpt from Audrey Nelson and Andrea Baptiste’s’ article "Evidence-Based Practices for Safe Patient Handling and Movement".

"Nearly every nurse in the United States was taught manual patient handling techniques.This is despite the fact that these techniques are not evidence-based, have been found to be unsafe for the nurse and the patient (Corlett et al., 1993) and are banned in Europe (Corlett et al., Hignett et al., 2003). Sadly, an evaluation of current practices reveal that 98% of nurses are using the manual patient lifting technique known as the “Hook and Toss” method (also known as the Drag Lift) (Owen et al., 1995), which has been deemed unsafe since 1981."

Vancare manufactures each of it’s slings in its’ state-of-the-art sewing operations in Aurora, Nebraska. Each sling has a carefully thought out clinical application. They are recognized to be the safest slings in the world. We are also known for our custom slings that we have developed specifically for a single customers’ needs. The slings are available in a variety of materials. If there is a sling that you are looking for and don’t find it here, call Vancare to discuss your needs.

In the battle to reduce healthcare worker related injuries, accessories become vital ammunition. Typically, accessories are not thought of as daily use items, but in many instances they become a standard of care. Take for instance the VanderClips. Ask yourself, how many patients need to be turned or rolled during a shift? How many weigh over 100 lbs? If the answer is more than one then the VanderClips may be your solution to eliminate injures associated with turning patients.

Please email Ryan@Securecare-usa.com to request the manual for your product. 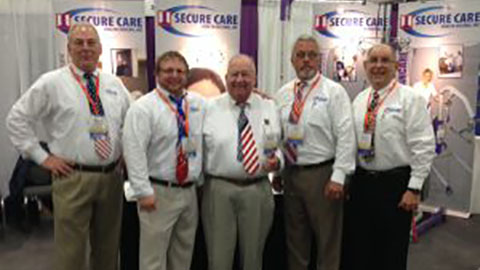 We are looking for quality people to add to our award winning team!

Just wanted to drop a thank you to you and your techs for the great service today on the replacement keypad. I know they did a few things beyond the original scope of work and suggested a few changes. They moved an antenna and looked at the other Secure Care units we have in the building. They were very smart and well accomplished in the aspects of servicing the products. Im sure we will be replacing the keypad at the back door since it is the same age and similar usage, so it won’t be long !

Thanks again and thank the guys again for a great job !

"We don’t buy from secure care because of their service, we buy from them because their products DON’T NEED SERVICE!"

"As operators, we all know we have many options to address the specific needs that exist in our buildings. However, I’ve always found it to be critical to have a company I could trust to do the job correct the first time around and know the problem is solved! Out of all the vendors I work with on an annual basis, I would say Secure Care would be the organization I trust the most and willing to attach my name to in providing a reference to any potential customer(s) inquiring about their service."

"What a nice group of technicians! They were so accommodating and understanding of our every concern. They really worked with us to understand exactly what was needed and how to make it as simple as possible."

"In my own experience with Nick, his knowledge and ability to articulate technical information in a non intimidating way was appreciated. I heard the same from many of the maintenance folks. Your installers are great guys and always respectful to the communities they’re working in."

"Ryan was attentive, professional, and accommodating. We would definitely recommend!"

"I just want you to know how helpful the Secure Care staff have been. They are all very wonderful professionals."

"Secure Care of Ohio’s many years’ experience are invaluable in installations, for they are very adapt to the needs of long term care facilities. Therefore, their recommendations can save money."